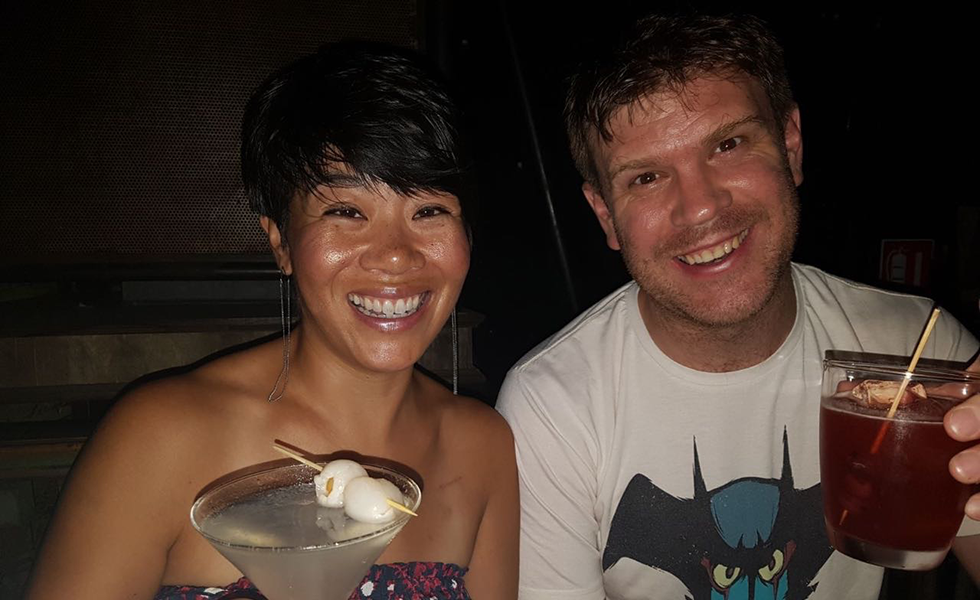 Part one of a two-part interview series with Bridgett and Michael, the company co-founders

As small business owners, we’ve come to understand the importance of getting to know our customers and our audience on a personal level. And while we’re not naturally inclined to talk too much about ourselves, we’ve designed this two-part interview series to enrich your experience with One Good Thing. Let’s start the journey…

Tell us a bit about your background…

Bridgett: Going back to 2009, I was working with a big international FTSE-listed company in Dubai. What was meant to be a 10-week project turned into two years of managing the Dubai office and working across India and Europe. I got fed up with all the travelling and relocated with the company back to London.

But the Dubai bug bit after just a few months back in the UK, so I secured a similar role with another international company and moved back to Dubai. After just three month, I was made redundant.

That was in 2012 and it turned out to be a blessing in disguise as I had always wanted to start my own business. I thought I’d be here for another few months and I’ve been here for ten years. I now have a husband, a child and a cat so it’s definitely home!

Michael: I had been working for Sky for seven or eight years in London, when a former colleague of mine called me from Dubai to say that his company (a satellite broadcaster in the Middle East) had a job going. I did a couple of telephone interviews then came over on a six-month contract. Having never been to Dubai before, I wanted to see what it was all about. I ended up being at the company for 12 years so something must have gone right.

B: I think a lot of people come to Dubai on a short stint and end up staying. The place has charm! It used to have such a transient population but over the past decade that’s changed, and people are putting down roots. It’s a very open community that’s great for newcomers and very open to new business.

How did One Good Thing come to be?

M: I had been feeling for a while that my time at the TV company was coming to an end. I wasn’t moving very rapidly in my career and I tinkered with a few ideas. Then in 2015, we had our son and a just a few weeks later, Bridgett was suddenly diagnosed with Hodgkin’s Lymphoma. Two seismic events in a very short time that had an irreversible impact on our lives.

It was a massive shock to the system and she went through six months of hardcore treatment. We used to go out for meals whenever we could during this time and that was when we came up with the idea for a subscription service where someone would receive a gift that was “part of the solution” to some of the World’s problems – or at least a step in the right direction. This evolved into One Good Thing.

When you go through a process like that it changes everything about the way you think. Any ideas you had of a way forward in your career or your life… you realise that you have to do them now because ‘later’ is not a given.

B: I remember the meal that we had so vividly. It was in The Brunswick during Ramadan when very few places are open during lunchtime. We used to take every Saturday afternoon “off” and spend some time away from real life, talking about holidays and everything that what we would do after we were done with cancer.

Mike’s dad’s birthday was coming up and we had bought him a book subscription. We were talking about how hard it was to buy stuff that was meaningful but easy to find and buy – hence the subscription idea. And that was how the idea of One Good Thing ultimately came up.

Doing something that had meaning to us was really important. I think any life changing situation will make you see things in a different way. This was, perhaps, the universe saying that we should do something different with our lives.

How is One Good Thing different from your past professional experience?

B: I always wanted to start my own thing because my family have always run their own businesses. Then the opportunity arose to work for myself and build something that was my own, and Mike came up with an idea that I thought was worth doing.

My two previous businesses were B2B and, as a serial entrepreneur, I wanted to learn something new. I had never done anything online before or sold to consumers and I wanted to get better experience in both. I also wanted a business that was scalable – as I get older, I want to work less even though starting your own business actually means working more. But having an ecommerce platform gives me the free time to do the things that are really important to me.

One Good Thing has been a challenge since day one as I know the least about B2C. I think I’m a glutton for punishment! We’re trying to show people that there are some really cool and innovative products and brands that are making a good environmental or social impact and saving the world in one way or another.

How do you feel the UAE landscape supports/is suited to start-ups and small business? How about ethical/sustainable business?

B: In terms of start-ups, it’s a really good place for welcoming new businesses and meeting new people. I love it here. People are open to new ideas as Dubai itself is only officially 45 years old, so both the country and culture are open to new things. It can be challenging as there are so many new businesses, so you need longevity. If you do something simple really well, you can have a successful business.

M: I have a slightly different opinion, but it is the first business I’ve started up, so I don’t have a great deal of reference points. The people we meet are very open and enthusiastic with a similar mindset which is active and encouraging. There are lots of groups to join and lots of support.

But I find the regulations and infrastructure puts a lot of barriers in our way. I was surprised how obstructive it was for people with new ideas to simply get things off the ground. It took about six months just to set up the company. On balance it’s a good experience – it’s just a little more difficult and costly than we had anticipated. In terms of sustainability and ethics, it’s growing and it’s in people’s consciousness.

B: There isn’t a huge amount going on but the movement towards businesses and people caring about ethics and sustainability is important. It’s the move from thought to action that’s the challenge. On the radio yesterday, I heard that adidas was promoting a beach run of 5k. For every 1k that people run, adidas will give back to charity to help clean the oceans.

It does seem to be moving slightly slower here than the rest of the world, but one reason is that it’s hard to set up a charity here. We have to be careful ourselves about the words we choose but we’re sitting in a nice position because we are not raising money for a cause, we’re selling products that in turn raise money for these businesses. How do you choose your partners?

M: Initially, we chose people that we had noticed on our travels. We saw a couple of operations in Thailand and Amsterdam before we started One Good Thing – this was the genesis of the whole idea. This resonated with us and gave us the inspiration to start a company as well as start to look around the rest of the world to see what other similar operations were out there.

We have a couple of benchmarks and criteria. They have to be good products in their own right and stand up on their own merit, where people would be happy to own them even without the social/environmental aspect. The second criteria is that they have a demonstrable impact. This is a definition that we sometimes struggle with, but we know it within our own minds and a lot of it is based on gut feeling.

B: A third thing I would add is that a lot of the companies we work with become partners after we speak and interact with the owners or someone else senior to get a gut feeling about them. Is this someone we want to work with? Does their story ring true? Sometimes our initial response via email is no but when we do meet them, we realise they are good people who do want to do good in the world.

For all of our partners, we want to help them understand they need to make more of their story. Sometimes they focus so much on the giving back side of their operation that they forget to emphasise how great the products themselves are and this can turn people off.  But we’re in a different market here which is good for us and good for them. Or there are those companies who don’t tell enough about their story, so it just becomes a product. Our job is to find the balance.

We add to these types of businesses because we are telling their story and the story of the product in a different way and opening up a new market. It’s also important to highlight that all of our partners are businesses and not charities. We want to help them become more global and reach a bigger audience so that ultimately, they can have a bigger impact. 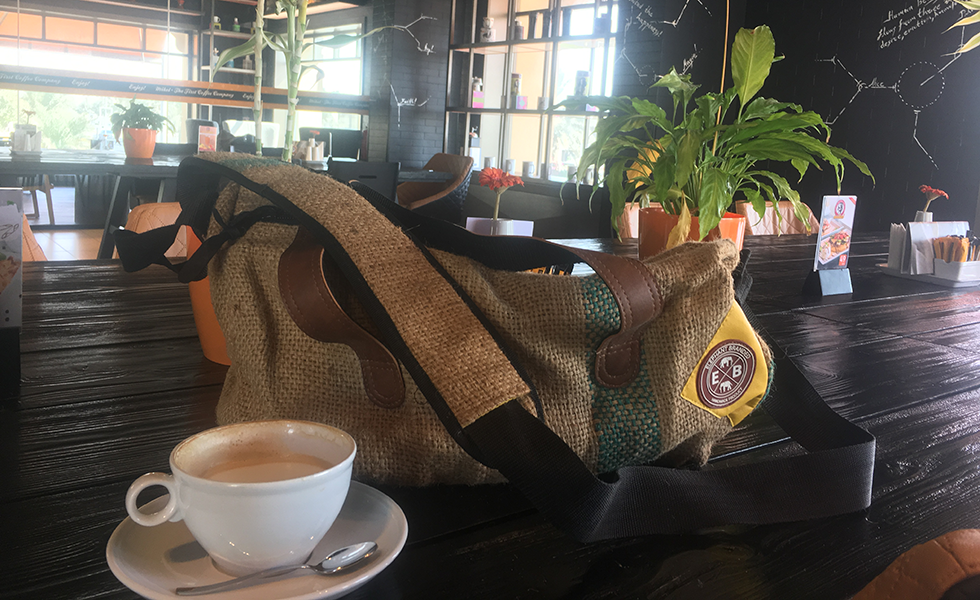 Check back next week for the second instalment in our Q and A. In the meantime, please click here to browse our gift collections and don’t forget stay in touch with One Good Thing on Facebook and Instagram, and be the first to hear all the latest brand updates.